One Small Decision: One Epic Result.

Five years ago, I made a mistake.

If I’d known my hasty decision was going to have the consequences it did, I would have evaluated it with more diligence. I would have taken the time to properly assess the repercussions of my actions. But when my sister and unborn nephew were killed in an horrific accident, any chance of my grief-riddled brain forming a rational decision was lost. I was hurting too much.
Losing Jorgie and Malcolm gutted me, but losing Ava the same week utterly destroyed me.

For the past five years, I’ve been a ghost, missing, presumed dead, hidden from the people seeking my demise. I knew eventually my past would catch up with me. I just never fathomed once it did, it would unravel even more secrets than the ones I've been hiding. But I'm tired of running and fighting fate. It's time to dive beneath the sheets, where all the best-kept secrets are exposed.

From the author who brought you the Enigma series comes the next question answering installment.

Why is Hugo hiding?
Who is after him?
And what was that kiss with Izzy really about?

You're about to find out, so hold on tight.

AUTHOR NOTES:
Book 2 of 2. Not a standalone. 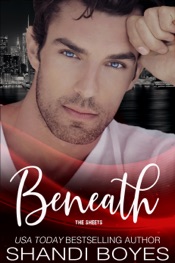