Sarunas Jasikevicius is one of the most recognizable players in the modern era of European basketball. He turned pro in 1998 and won 23 titles with his clubs (Barcelona, Maccabi Tel Aviv, Panathinaikos, Fenerbahce) plus 3 medals (a European gold, a European bronze and an Olympic bronze) with Lithuanian National team. He’s been the point guard everybody wanted to watch, every team wanted to sign, every fan dreamt to cheer for. He built his success with his amazing will to win: he was able to win in the athletes-era, while whe can consider him as an “average athlete” at his best. He didn’t won with his legs, he did it with his mind, his heart, his talent to become a better player year by year. The book by Sarunas Jasikevicius (written with the italian journalist Pietro Scibetta) retraces the steps of an extraordinary life and career. It follows his arrival in the world of American basketball in college, to his return to Europe where he won National Championships and Euroleague, and then back to the States again to compete in the NBA. Finally, it recalls other successes in Europe right up to the end of his career as a player in 2014, with the Žalgiris Kaunas jersey. This opens the door to a new adventure for Sarunas, starting this year with his first experience on the bench as assistant coach for Kaunas.The autobiography of a great champion, loved by fans all over the world, always able to leave an unforgettable memory in the heart of his fans. This book is a confession, a story, but also a tribute to the world of European basketball of which Sarunas was the undisputed star. 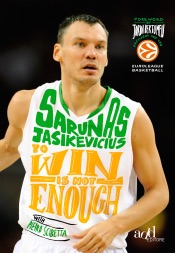